Loving The Latte: Are You A Morning Coffee Addict?

My first ever taste of La Colombe coffee at Pitchoun Bakery Cafe, Los Angeles. The large option is served in a bowl without a handle
​
​TROUBLE BREWING
​
​Historically, although I may have enjoyed drinking the odd cup on occasion, I was never a big fan of coffee.

Until recently the only time I ever really indulged in it with any frequency was once a week at the country club, my bottom comfortably sunk into a large Chesterfield leather armchair as I lost myself in a good book. Even then it was always more of an optional extra. Part of a broader pleasurable experience, coffee may often have been there, but it was never the main attraction.
​
It was generally a drink I would entertain only when I’d had trouble sleeping the previous night and needed a little help to get through a day at the office. Whenever I met up with friends in Starbucks or Costa I would always scoff at their opting for coffee when the glorious delights of hot chocolate with marshmallows and cream were available. In fact, caffeine was generally a no-go for my quasi-healthy lifestyle which has had me drinking decaff Earl Grey tea for the best part of a decade.

Yeah, like the hot chocolate was fitting in to that lifestyle anyway.
​

Sipping a brew at your usual bar, enjoying local brand Peet's in San Francisco, or glugging down a Costa in Otley, coffee is the ideal drink for travellers
​
​NEW GROUNDS​
​
Back in September that changed. A couple of weeks of poor sleep found me at the office canteen every morning sipping on their reasonably priced lattes. Suffering from a similar temporary fatigue problem, a colleague of mine was also indulging in the caffeine kick and we found ourselves regularly popping over for coffee together. After what was only supposed to be a couple weeks of helpful pick-me-ups, our morning trips to the coffee vendor had become a staple of starting the working day.

Somehow, adding a ritualistic social aspect to the drinking of coffee had allowed an insidious advantage to the addictive properties of caffeine, and I was hooked.
​
Coffee was no longer just an aid for getting through a sleepy-eyed morning; it had become the most pleasurable part of the day, something to look forward to every night as I turned off the bedroom light, and something to be celebrated every dawn when turning on the office desktop computer. We laughed, we cried, we got some work done, all while chugging down cardboard cups of Joe. The latte life was good.​
THE BITTER END

Then, two months in to our new morning latte tradition my fellow coffee junkie decided she wanted out. She said the coffee-fuelled times had been fun, but she didn’t want to grow dependent on it, and so was now limiting her intake to Fridays.

In hindsight, I should have done the same. Instead, I rapidly escalated my coffee drinking by beginning to indulge on my days off, eventually finding the flimsiest of excuses to journey into town so I could pop by the local Costa.

Need bread, darling? I’ll nip out to the corner shop for you.

Down to our last two bottles of soy sauce? Let me rush out and get some.

Has it been a week since my last haircut? Best go see the barber.

Before I knew it, every casual walk, restaurant visit, shopping trip and day out just happened to be within close proximity of a coffee shop. Any ideas my wife had for an outing that didn’t fall within the vicinity of coffee immediately lost my interest and she would soon find herself being presented with an alternative activity.

Even worse still, I would find myself agreeing to any old dull excursion if there was caffeine on the horizon. Enthusiastically rushing out of the house to accompany the wife on a shopping trip for a new set of linen tea towels was probably a low point.

For months I was planning my life to coincide along the ley lines of coffeehouse companies.
​
And then, it got worse.
​
WHERE HAVE YOU BEAN ALL MY LIFE?
​
One day, while walking out of Costa desperately tonguing the small hole of the plastic top of my disposable coffee cup in a bid to taste some drops which had cooled enough to drink, I spied a beautiful, tall creature sat at the window. She was almost twice the size of my current infatuation, seemingly having so much more to offer. It was love at first sight. Never before had I wanted to kiss a rim so badly. I had encountered… The Large Latte To Go.

In the months that I had been frequently drinking coffee why had it never occurred to me to Go Large? Perhaps as a safeguard against addiction beyond the point of no return my mind had developed an ocular censure to it. Perhaps my bank balance was working in tandem with my sense of reason to ensure I just never gave it any thought. Or perhaps for some reason the beverage Illuminati had been maliciously hiding it from me and that day one managed to accidentally slip through the net. Whatever the reason, that morning I promised myself that, only as a special treat, tomorrow’s drink would be a Large One.

I’ve not had a regular sized cup of coffee since.
​
As the office canteen only offers servings of a size suitable for ordinary coffee drinking human beings I now find myself adding almost 2 miles extra to my morning commute just to grab what is essentially a bucket of coffee from my not-quite-local-enough Costa.
STAYING STRONG
​
Despite the strong hold coffee has over me, I have been able to successfully enforce a handful of rules to its consumption:
​
​Like a caffeine-averse Mogwai, drinking coffee in the late afternoon or evening is a definite ‘no’ for me. Even though there are occasions in the evening I would love to be sipping from the mud coloured fountain, its tendency to prevent me from getting any sleep, (and I really do mean ANY sleep), makes it an unappealing activity. It is also why I decline to consume more than 2 cups a day, as such a large quantity also results in insomnia.
​
The limit of buying no more than 10 cups a week encourages me to sometimes forgo that second cup at work so I can have one at the weekend, but also to ensure spending on coffee never gets out of hand. The rule about never drinking it 7 days in a row means my mind and body get at least one coffee-free day of rest a week. 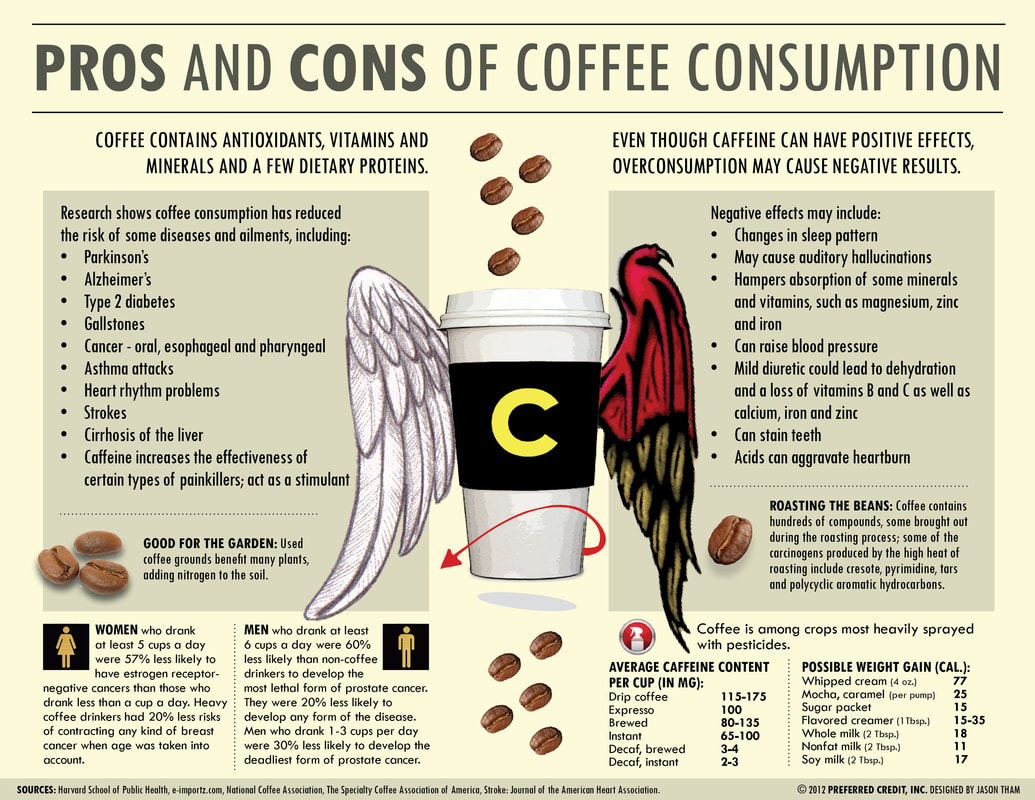 Infographic courtesy of Jason Tham: https://jasonthamdotcom.files.wordpress.com/2013/05/pros-and-cons-of-coffee-consumption-infographic-copy.jpg
SPILLING THE BEANS
​
So am I really a coffee addict now?

It is difficult to tell if I am genuinely addicted to coffee. On the one hand I have found myself thinking about drinking coffee and eagerly looking forward to my next one even while drinking a coffee. I found myself drawn to watching Jerry Seinfeld’s ‘Comedians In Cars Getting Coffee’ just because of all the gratuitous coffee porn shots. Oh, and there was that one time I decided to lay off it for a day but found myself helplessly watching, in an out-of-body type experience, as I involuntarily drove to Costa on my way to work and bought a coffee against my will.

But on the other hand I have generally been very good at adhering to my short list of coffee drinking rules.
​
Up until now I haven’t considered myself a real coffee addict simply because I never drink ‘real’ coffee. Nothing beyond a latte is of interest and it could be entirely possible that the dairy might be just as important to my addiction as the beans. If it isn’t swimming in excessive amounts of milk then I can’t actually stand the taste of coffee.
COOL BEANS
​
This means I’ll never be considered cool enough to join the genuine coffee drinking sophisticates who confidently order and expertly knock back Cappuccinos, Americanos, Long Macchiatos, Espressos, Double Espressos, Mochas, Ristrettos and Vanillabullshitlattecappathings (actually, I think that last one may just be from an episode of Curb Your Enthusiasm). Just because I carry a Costa card it doesn’t mean I’m really in the club. For all the coffee credibility it gives me, I may as well be ordering with a fake ID.

Sure, I’ve tried joining in conversations over at the coffee subreddit, adding a humorous coffee-related infographic to my desktop background at work, and sharing coffee related memes on Facebook (Coffee: Because Anger Management Is Too Expensive’, oh how we LOL’d), but I never feel like I’m really part of the group. It all has an air of cultural appropriation about it, which means I’m essentially the Ali G of the hot beverage world. I can sense coffee loving 90s sitcom characters Fraser Crane and all those Friends at Central Perk sneering at me behind my back.
​
Just because the other, harder, users haven’t accepted me into their culture though, it doesn’t necessarily mean that I’m any less of a caffeine junkie.

Coffee related memes are among the worst memes you'll ever see
CURBING THE CAFFEINE
​
Without questioning their dependence upon it, billions of people enjoy the ‘hit’ benefits of caffeine every day, particularly in the form of coffee. Possibly the most used psychoactive substance in the world, is it any wonder so many of us can find it difficult diagnosing an addiction to something so insidiously normalised in our culture?

Trawling various medical sites on the net I found some key questions to ask for those concerned about their coffee consumption:


Thankfully, of all the major points raised regarding coffee addiction, it is really only the spending that seems to be applicable to me. Handing over £1,200 a year for a daily taste of the beans is clearly excessive, but since I have not experienced any headaches or negative moods, I still feel a ‘hit’, and my heart hasn’t beat its way out of my chest, it is unlikely I have a serious drinking problem… yet.

So am I addicted to coffee?
Well probably, yes. Although I fared well with regard to more health-orientated enquiries, it is inescapable that spending such a vast amount on coffee, coupled with a strict daily ritual and frequent thoughts regarding its next intake, suggests that there is at least a mild addiction at work.

Is my coffee addiction a problem?
At the moment it is only a financial problem. Although after a time this could degenerate into the more unwieldly areas of addiction, it would appear that my 4 rules for drinking coffee are either preventing, or at least reducing the speed of, the full problematic issues that accompany coffee addiction.
​
In essence, I might be regarded as a morning coffee addict; someone who indulges their mild dependence excessively at the start of the day, but can resist any further temptation by enforcing the will power necessary to maintain a healthy life / coffee addiction balance.