LOCKERBIE: THE NIGHTMARE BEFORE CHRISTMAS

Rick Monetti boarded Pan Am flight 103 on December 21st 1988. He was one of 35 Syracuse Students aboard. Rick and the other 259 passengers were unaware that the U.S Embassy in Helsinki had received bomb threats against a Pan Am flight.  Eighty percent of staff at the American Embassy in Moscow, however, cancelled their flights with Pan Am from Frankfurt. Although the airline had been informed, the general public had not.

A document by lawyers who fought for compensation claimed that “Pan Am HQ chose not to go to levels of alert that would have required 100% baggage search.” Yet the airplane took off with 159 empty seats.  According to a Middle-Eastern accented man who tipped-off the U.S. Embassy, one of the women aboard was ‘unwittingly carrying a bomb’.

It is still unknown whether the bomb was actually accompanied on the flight by a passenger or not. The commercial airliner made the journey from Frankfurt to Heathrow unscathed. It then departed Heathrow for New York at 18:25, over an hour behind schedule.
In the forward cargo hold of the Boeing 747, just behind the cockpit, was a brown samsonite suitcase. It contained a Toshiba portable radio cassette player. Inside that was a battery wired to a barometric sensor, which started a timer. That was connected to a detonator, which was linked to about 350 grams of Semtex plastic explosive.

According to aviation expert Christopher Wain, a few ounces of Semtex are the equivalent of 6 hand grenades. He explains that due to cabin pressure aboard aircraft, it was destined to blow apart “like a balloon, in a fraction of a second.”

Thirty-eight minutes from Heathrow, and 31000 feet above sea level, the bomb ruptured the hull. It punched a fatal hole, the size of a large dinner plate, in the aircraft. The immediate loss of pressure tore the plane to shreds. More than 4 million pieces of wreckage were spread over an area spanning 845 square miles.

​RAINING BODIES
In her garden, in the small Scottish border town of Lockerbie, Marjorie McQueen heard a loud noise.
“... I thought it was a clap of thunder, but it just carried on getting louder and louder all the time and there was an enormous crash.” she said. “We couldn't figure out what it was until my husband received a call from a colleague who said that the nose of a plane was lying in the field.” One woman would later tell a TV interviewer “There was this absolutely massive sort of red glow in the sky that went firstly upwards and then out… We thought it was some sort of… nuclear explosion.”

Then the evening sky rained debris. A shower of suitcases and gift-wrapped Christmas presents was accompanied by a torrent of airplane parts. Tons of aviation fuel drenched the town. A jet engine left a small crater in a parking lot. A 60-foot section of fuselage inserted itself in-between two rows of houses. It contained 60 dead.

A golf course was bombarded with bodies.

The scattered carnage finally claimed victims on the ground when a wing hit three houses at Sherwood Crescent. The fireball was so hot that it vaporized the homes and the 11 residents within. “Every house had some damage,” Says Robert Monetti, Editor of Victims of Pan Am Flight 103 newsletter, “Many houses burned to the ground…because one of the engines severed the water main.”

BBC news correspondent Andrew Cassell had been one of the first reporters on the scene. He recalled “This had been a disaster of international proportions. Here a jumper snagged in a tree. There an American passport partially hidden by an in-flight meal tray, strewn across the footpath.” The aftermath revealed that a total of 270 people had died that night. Almost 260 had been on the Pan Am flight. “The smell of aviation fuel was overpowering.”

Over the next few days the people of Lockerbie opened their homes to help relatives of passengers, despite their own grief. Bonds would develop over this period, and by February the following year, the organisation ‘Victims of Pan Am Flight 103’ had formed. Their goals would be to discover the truth about the bombing and seek justice for their slain loved ones. 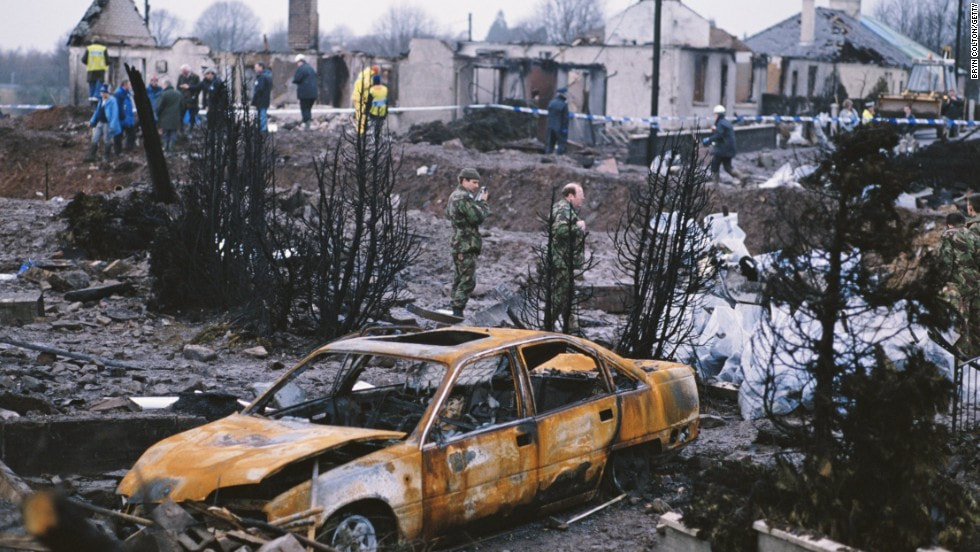 It is believed that the bomb was supposed to detonate over the Atlantic, which would have sunk all evidence. However the delayed departure of the flight meant that Captain James Macquarrie, 55, and his passengers died over Dumfries and Galloway. This proved useful to air accident investigators piecing together what happened.

Within months the investigation implicated Syria and Iran as the masterminds behind the disaster. Six months before Lockerbie an American warship had shot down an Iranian airbus, killing 290 Islamic pilgrims. Iran had vowed the skies would "rain blood" in retaliation.
As it would turn out, a 3 year investigation would not conclude with allegations against Syria or Iran. Instead, the Lord Advocate, Scotland’s Chief Law Officer, obtained a warrant for the arrest of two Libyan Nationals. Some believe a shift in the political climate may have been the reason for a sudden change in suspects. The charges against the Libyans were Conspiracy, Murder, and Contravention of the Aviation Security Act of 1982.

The families of the victims are still divided about Megrahi’s conviction, believing that world politics has interfered with the investigation. American Robert Monetti lost his son, Rick, in the disaster. “I started out not being a believer,” says Monetti, whose son was only 20 years old when he died, “but by the end of his trial I was absolutely sure Al Megrahi was guilty."

Many British families are more cynical about the verdict. “These men were just the jokers in the pack,” says Betty Thomas, from Carmarthen, “we will only be happy when we know who organised and paid for it.” Betty lost a 29 year old daughter and 20-month old granddaughter to the disaster.

After several appeal rejections, on 20th August 2009 Megrahi was finally released from Greenock Prison, Scotland, less than 9 years into his sentence. He had been released on grounds of compassion, due to being diagnosed with prostate cancer.

Libya has since accepted responsibility for the crime and agreed to pay £1.7 billion in compensation. It is the first time that any state considered a sponsor of terrorism has offered compensation to families of victims.

Megrahi would eventually die in his homeland in 2012.

To this day the Lockerbie disaster remains Britain’s largest mass murder. For many relatives of victims, aspirations for complete justice currently seem unlikely to come to fruition.

Still an ongoing criminal investigation, as recently as March 2019, at the request of Scottish authorities 5 former Stasi (Communist East German Intelligence) members were questioned as witnesses.