​​*Note for grammar Nazis about the apostrophe and the spelling of 'Shakespeare' - the band are titled 'Shakespears Sister', not 'Shakespeare's Sister'.

Even the unlikeliest of fairy tale pop band reunions have become something of an inevitability in recent times. Notable among them include the reformation of Busted following Charlie Simpson’s variable ponderings as to how, among other things, life might have been in the early noughties had he been in a band he ‘actually liked’. Despite comparing it to torture and claiming a reunion wouldn’t happen in a million years, he eventually managed to perform with the group once again.

Norwegian pop masters a-ha promptly unretired in 2015 having completed a high-profile, farewell tour named Ending on a High Note (which we should probably start referring to as Continuing on a High Note?). Without even mentioning Robbie Williams and Take That (mostly because it doesn’t seem to have ended well), the same can be said for a string of other eighties and nineties acts currently returning to the spotlight, sporting more maturity and less hair.

The more cynical among us might point out that money, boredom and the sticky wicket of solo anonymity are all convenient incentives for fractured bands to get back together. Even so, provided it’s not a couple of tickets to Coldplay in a birthday card, most of us like a surprise, and as sequences of unlikely events go in the world of pop, you need look no further than what happened to Bananarama in 2017.
​
​Bananarama 2017: A Honey Moon Period
​The original line-up reformed after almost thirty years of mutually-assured animosity, an enmity maintained on one side by the band’s two ever-presents Keren Woodward and Sara Dallin, and on the other by Siobhan Fahey, who departed in 1988. Their decision to bury the hatchet was reportedly set in motion by the untimely death of George Michael, something the group would most keenly have felt since Woodward was the long-term partner of Michael’s former Wham! bandmate Andrew Ridgeley. As surprising as the reunion of Bananrama may seem, it is made more special by the fact that, incredibly, the 2017 tour was the first the original line-up had ever partaken in together.

Among the countless highlights their first rodeo gifted patient fans, one sequence in particular stood out on the tour. The trio would succinctly introduce ‘Cheers Then’, a track from their original album Deep Sea Skiving, as a tale of friends falling out. At the close of the song, Siobhan exits the stage, leaving Keren and Sara to stroll to the front without her. The moon then appears, big and bright on the screen behind them, bringing to mind a certain non-Bananarama song from the early nineties.

It couldn’t be though, could it?

All of a sudden, fans found themselves in the twilight zone as the pair started performing the Shakespears Sister song ‘Stay’.
​

Bananarama being overawed by a colossal moon - embracing the success of Shakespears Sister's Stay
​Banana Splits
​Of course bands playing songs of former members, rivals or competitors isn’t unique. Heaven 17’s Glenn Gregory regularly enjoys taunting the band’s keyboardist and former Human League member Martyn Ware with jolly, impromptu, acoustic renditions of ‘Don’t You Want Me’, making light of tensions that have, in reality, long since calmed. But to appreciate the absolute unlikelihood of Bananarama covering ‘Stay’, one has to understand the ill sentiment it likely held for all three members of the group.

For Woodward and Dallin, and what remained of the Bananarama brand heading into the nineties, the prominence of Shakespears Sister, and in particular the enormous hit that was ‘Stay’, brought into sharp relief their own dwindling fortunes. Siobhan achieved with Shakespears Sister what Bananarama never managed in their heyday - a number 1 single. Just to rub it in, ‘Stay’ would also prove a victory for nominative determinism, starting a run of eight weeks from February 1992, the single occupied the longest ever period at the top spot of the UK singles charts for a girl group, a record still unbroken to this day.

By comparison, Dallin and Woodward were fast being molded into a proto-Steps by Stock, Aitken and Waterman, with their 1993 album Please Yourself mustering only two hits, a fine update of Andrea True Connection’s disco-tastic ‘More, More, More’ and the defiantly chirpy ‘Movin’ On’. Neither song managed to climb higher than 24 in the charts. Although the pair continued to produce singles and albums, they would have to wait another twelve years before any would chart again. Chalking up a dazzling nine top ten singles in the seven years together as the original line-up, post-Fahey’s exit the band would manage just one more - a number 3 with ‘Help!’, aided in no small part by a mixture of the Beatles, French and Saunders, and Comic Relief. 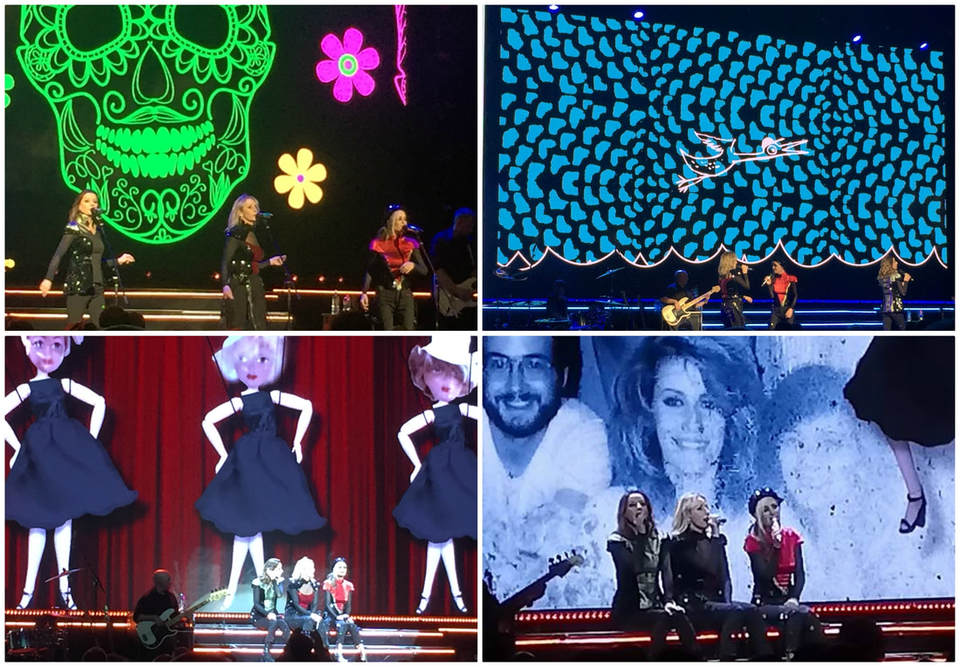 Several moments taken from the live Bananarama show at Sheffield City Hall, 2017
Shaking Off The Past
​Pop quiz: How many members were there in Shakespears Sister?
​
‘That’s an easy one’, I hear you squeal, ‘I’ve seen the videos, it’s two!’

In the case of three (and a bit) of their five albums, the answer is actually… one.

Essentially the ‘band’ started (and ended) as a Siobhan Fahey solo project. Following the release of her debut single ‘Break My Heart (You Really)’, Fahey was convinced by Eurythmics alumni and then-husband Dave Stewart that she and Marcella Detroit, who had been drafted in initially on songwriting duties, should make Shakespears Sister a duo. And so it came to pass, despite their shared reticence of being tied to a band, with the release of debut album Sacred Heart. The gamble paid off, with the epic ‘You’re History’ bagging the duo a number 7 hit in the summer of ‘89.

It was 1992’s sophomore Hormonally Yours however that would make the biggest noise. ‘Stay’ remains the only Shakespears Sister track to feature Detroit on lead vocals, with Fahey having repeatedly asserted that it wasn’t representative of the band’s direction or sound. Increasingly disillusioned with the attention the song, and by inevitable association, Detroit, was receiving, Fahey sensationally terminated her co-star’s tenure at the 1993 Ivor Novello awards. In an acceptance speech delivered by proxy through their publisher while collecting an award, Marcella found herself being publicly dismissed from the band, bringing to an end a fractious year of intense success and in-fighting.

The following three Shakespears Sister albums would return to the format of solo works, but would struggle to gain traction in the popular mainstream, with Fahey facing a prolonged battle to get the third one released at all. She would eventually succeed in 2004, almost ten years after the recording was completed.

For all the creativity and craft she had poured into Shakespears Sister, the act would primarily be remembered in popular culture for Detroit’s haunting performance of ‘Stay’, and perhaps poignantly, the struggle the pair engage in during the closing sequence of the song’s video.​
​
​Stay Another Day
​​Fast-forward once more to 2017 and the performance of ‘Stay’ on the tour, where Siobhan’s back at the top of the stairs, just as she was in the video. Snarling ‘you’d better hope and pray, that you make it safe, back to your own world’ she descends to join her Bananarama bandmates. Arms form a link around each other’s shoulders and, if you can believe your eyes, a pop epiphany begins to occur as twenty-five years on, the orphaned song and its refrain of ‘Stay with me’ suddenly seems to have found a meaning its singers can relate to.

The video’s sweeping conclusion sees Fahey’s Angel of Death ascend the stairs alone, defeated in her struggle with Detroit. With Bananarama however, the roles are different and the ending’s a happy one. Flanked on either side by Keren and Sara, Siobhan is redeemed by her own guardian angels, with the performance ending on an encouraging, upbeat note. As a fan of both Bananarama and Shakespears Sister, it was a remarkable, emotional occurrence, and one I’m sure will (ahem) stay with me for a long time to come.

Maybe pop music miracles do happen after all.
​ 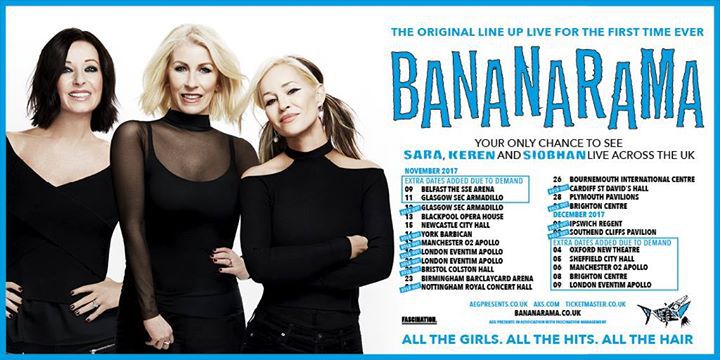 Bananarama: The Original Line Up Live For The First Time Ever - 2017 Tour Dates
You May Also Enjoy...