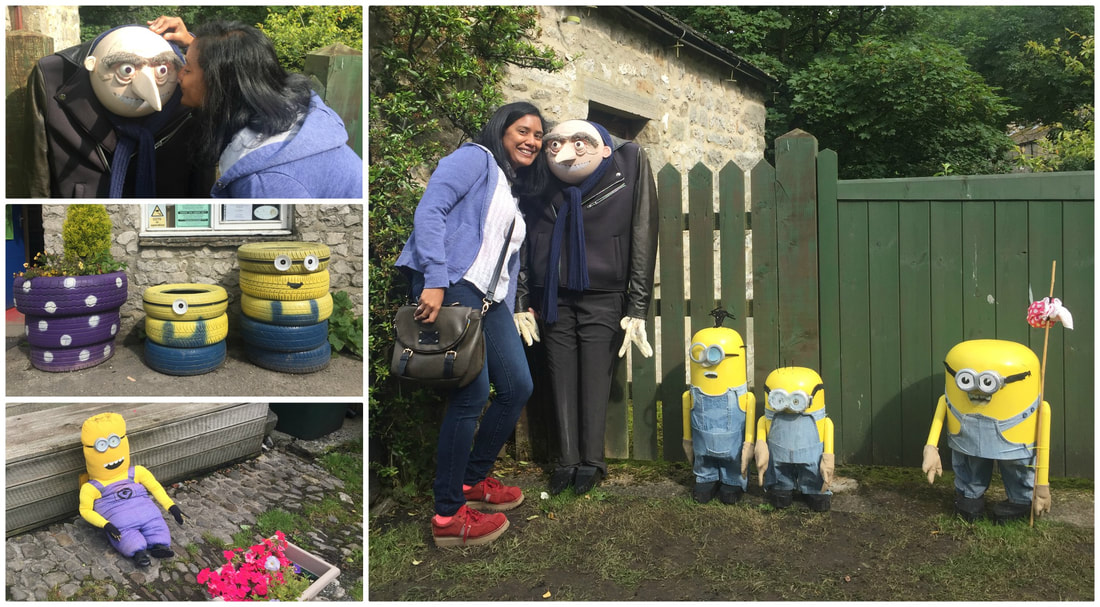 Despicable Me star Gru and his Minions made several appearances at Kettlewell throughout the day
​Even at an early hour on a Sunday there were several establishments open for refreshment, both real and straw-based, and we eventually settled in at the village hall, which was serving delightful homemade treats. We opted for a couple of scones and shortbread to take home (they were kind enough to supply small plastic bags at no extra cost) and some drinks, Dee cooling down with a strawberry milkshake while I enjoyed the homely taste of a hot chocolate with cream. The most refreshing aspect of the cake stop was that it all added up to less than £7.00, a rare luxury in an era where tourists are usually expected to go home penniless.

Kettlewell Cake Stop: Great homemade food at reasonable prices from the village hall
Flirting with an inanimate beach babe was next on the agenda, although since she already seemed to be pregnant I soon returned to my wife’s loving arms. Dee had been busy herself, helping a straw child retrieve his kite from a tree, not that he thanked her for it. We witnessed a possible botched burglary as a straw man struggled through a window holding on for dear life, and then we stumbled upon the strangest thing in the entire village – a scarecrow that was made to look like, well, err, a scarecrow! Figuring the work was easy we had a go at being scarecrows ourselves, but finding the local birds too intimidating we realised the job had been made to look easier than it really was, so we continued on with our uncanny voyage. 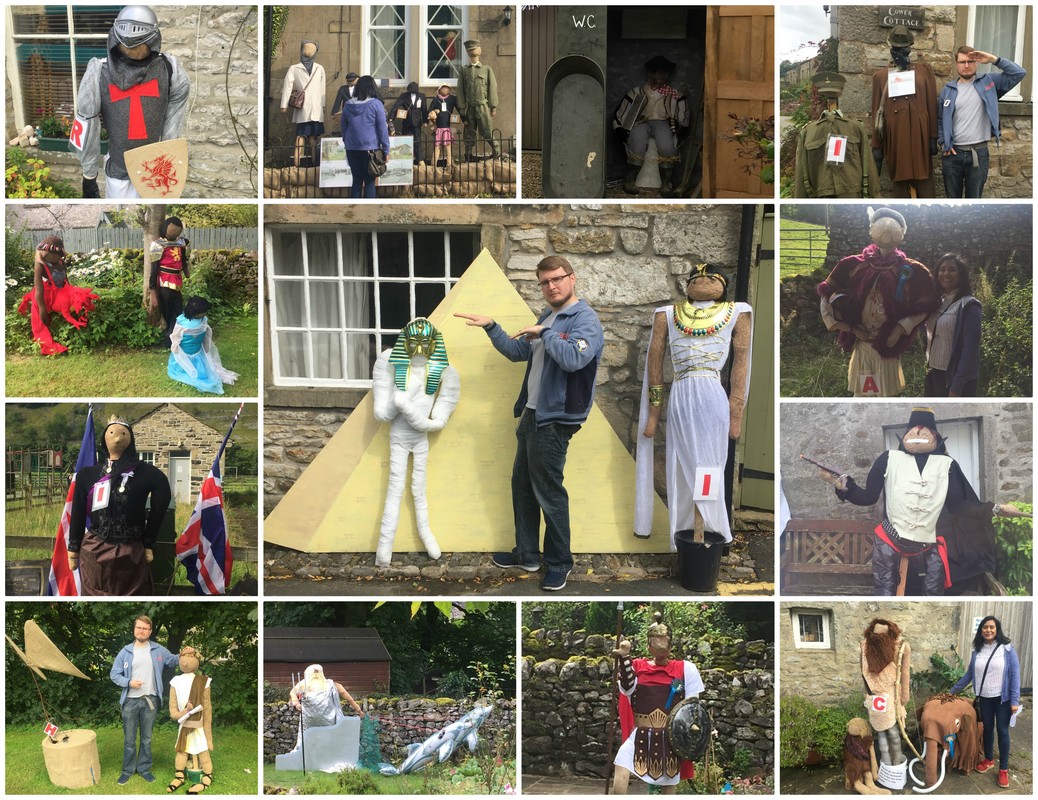 Travelling through time - Just one of the reasons the Kettlewell Scarecrow Festival is value for money
​His wasn’t the only famous face in town either. Apart from Gru and an army of Minions dotted all over the village, Kettlewell is also home to the likes of Bob Dylan (famous for his song ‘Like a rolling tumbleweed’), Shirly Bassey (singing ‘Goldfarmer’), Cliff Richard (singing ‘Living doll’), the Britain’s Got Talent judges (including Simon Cowshed), deceased musicians Michael Jackson, David Bowie, Amy Winehouse (singing ‘Hay little rich girl’), Elvis Presley (singing ‘Love me tractor’), Freddy Mercury (singing ‘Made in Hay-ven’), and fictional characters Mr Greedy, the cast of The Magic Roundabout, Snow White and the Seven Dwarfs, Belle and the Beast, Winnie The Pooh, Iggle Piggle, Captain Pugwash, Princess Poppy the Troll, Indiana Jones (star of Grazers of the lost fork) and The Blues Brothers’ Jake and Elwood (singing ‘Shake your chicken tail feather’). 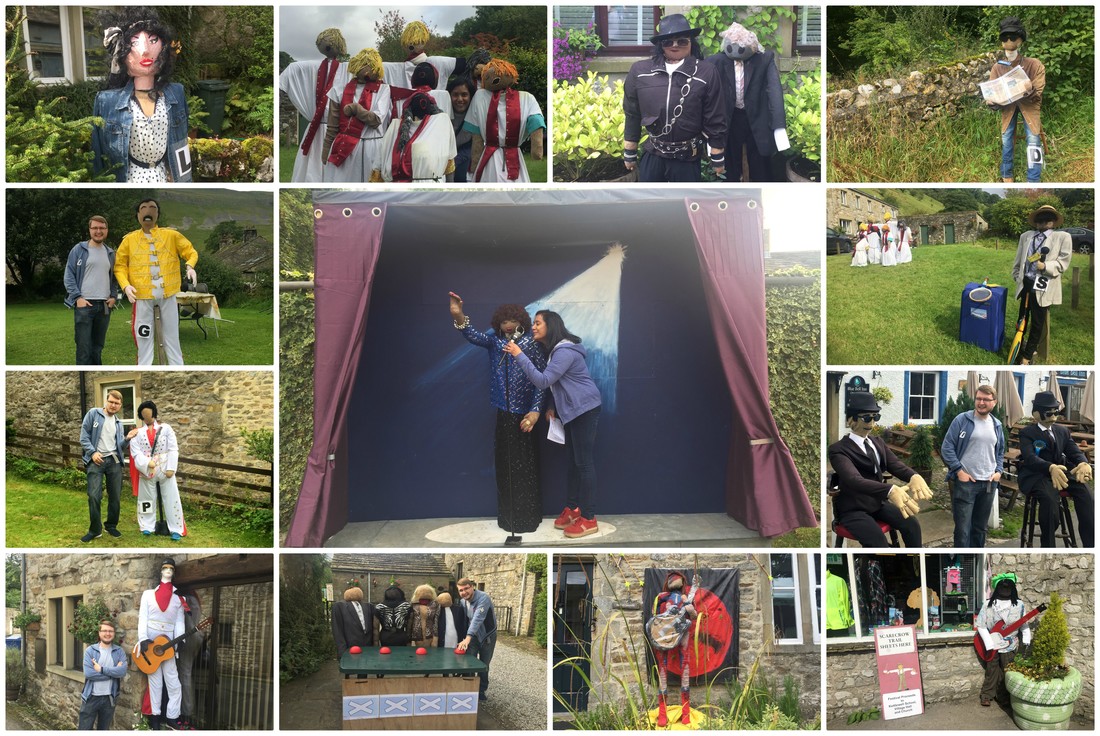 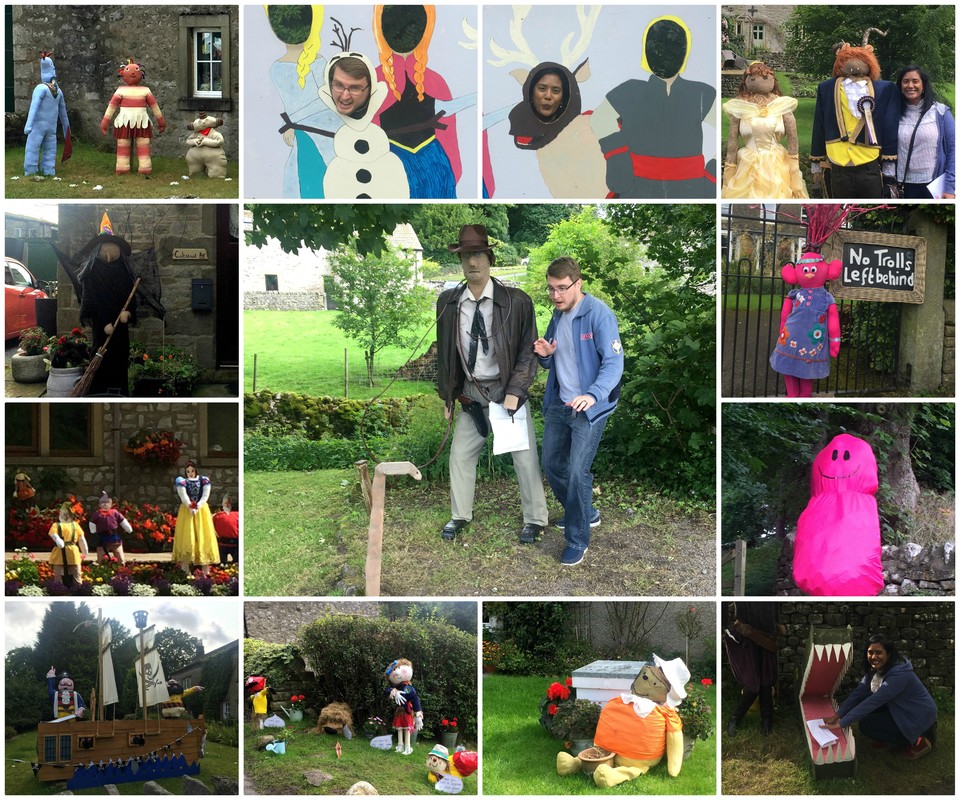 From Captain Pugwash to Indiana Jones, the range of entertainment available for all ages at the Kettlewell Scarecrow Festival is astonishing
Personally, with all the lab equipment and steaming pipes setting the scene, I found the Willy Wonka section to be the most impressive of the event, but it only managed second place in the competition. Taking first prize was the Church tableau of The Wedding (apparently later on the groom admitted to really enjoying the day, but the bride was completely blown over!). Perhaps the real winner should have been the regular-looking scarecrow, someone who’s reportedly outstanding in his field. 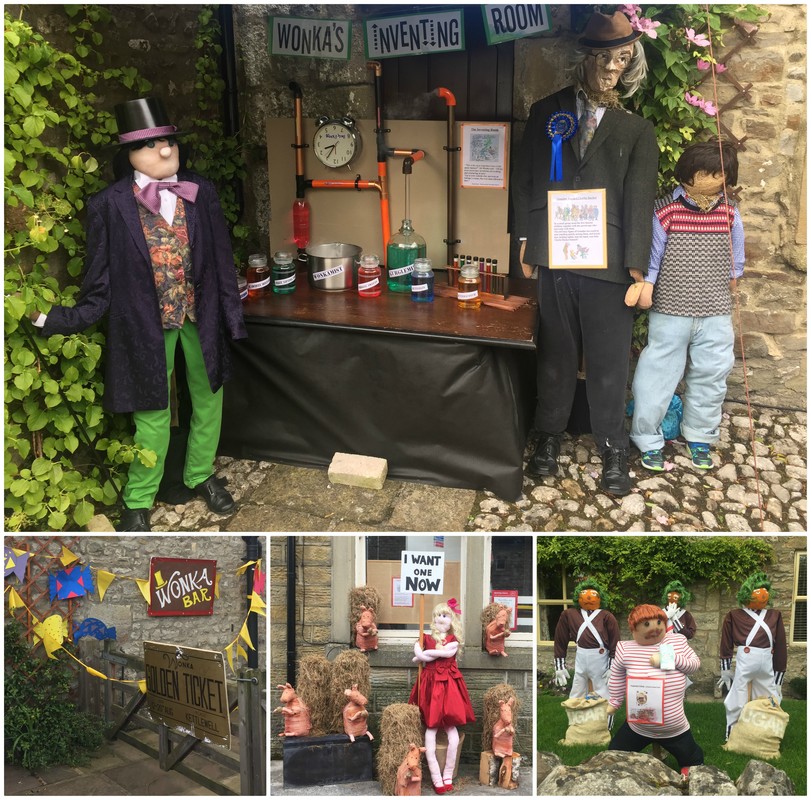 Charlie and the Chocolate Factory: Still less creepy than the Johnny Depp version
FLEEING LIKE CROWS: TIME TO GO HOME​
Including a 20 minute cake stop, the entire Kettlewell scarecrow event took us approximately 2 hours, so the day wasn’t overly straw-n out (I am so sorry, that was the last one, I promise).

As we were leaving, an army of motorcyclists and cyclists were invading the village, turning the outside of Zarina’s café into the world’s largest and oddest climbing frame, populated exclusively by a strange mix of men in black leather and rainbow lycra. Turning right to depart the fully loaded car park, we were relieved to have arrived so early to be able to enjoy the festival without the swarm of fellow visitors.
​
There were some creepy aspects to walking through a village populated primarily by people made of straw, and there were a couple of instances where you might be unsure whether your photo op pal might return an arm around your shoulder or walk off afterwards. Overall though it is a delightful spectacle for the entire family to enjoy, and being such a low-cost day out, well worth a couple of hours of your time.

If you are thinking of going to the next Kettlewell Scarecrow Festival then you might want to check out their website.