22/07/2016
​After over two decades of intent, I have only recently got around to watching cult classic film The Adventures of Buckaroo Banzai Across the 8th Dimension (1984), the complicated tale of Dr. Buckaroo Banzai (Peter Weller) a half white, half Japanese test-pilot, neurosurgeon, particle physicist and rock star who leads a team of musicians-come-heroes called The Hong Kong Cavaliers to save the world from a red-neck alien invasion. And believe it or not, that’s the short synopsis.

While it is easily tempting to discuss the many facets of this bizarre film, it is the music that I wanted to share with you today, specifically the end credits. Although this piece of music has no official title as the soundtrack has never been released, it is commonly referred to as ‘The Team March’, due to the scene it accompanies. With the red-neck aliens defeated and the main narrative over, Buckaroo’s team assemble in a dry LA aqueduct for some highly-focused and cool-looking walking…
​
​​As great as the simple ditty of layered synths is, it is only when accompanied by the visuals that it really evolves beyond the sum of its parts to become something truly magnificent and goosebump-worthy. Buckaroo, played by Weller as a cross between Einstein and Adam Ant (no, seriously), climbs down a rope to join his waiting friends, one of which looks like Billy Zane but isn’t.
​
​​One by one they all join in, each getting a hero shot, and pacing next to each other in time with the music – except for Jeff Goldblum (dressed as a camp cowboy, for reasons never disclosed), who appears to be having difficulty keeping up either because he’s a lanky performer or because it’s part of his quirky character. Either way, it’s stunningly charming, especially when he gives a fresh-faced, intrigued smile to the camera and projects an air of fun that embodies the entire movie.
​
Everyone wears their personalities, or rather their desired personalities externally, their clothes representing the ideal self. In turn a few of them add the occasional quick dance move into the walk – a celebration of retaining individuality while embracing unity with their gang. Just by glancing you know that each and every one of these people has a colourful and fascinating back story, even if you’re never going to find out what it is. It appears somewhat fitting that the walk is being led by a kid, as the entire film seems to be a child’s blissful fantasy of what life as an adult might someday be like.
​ 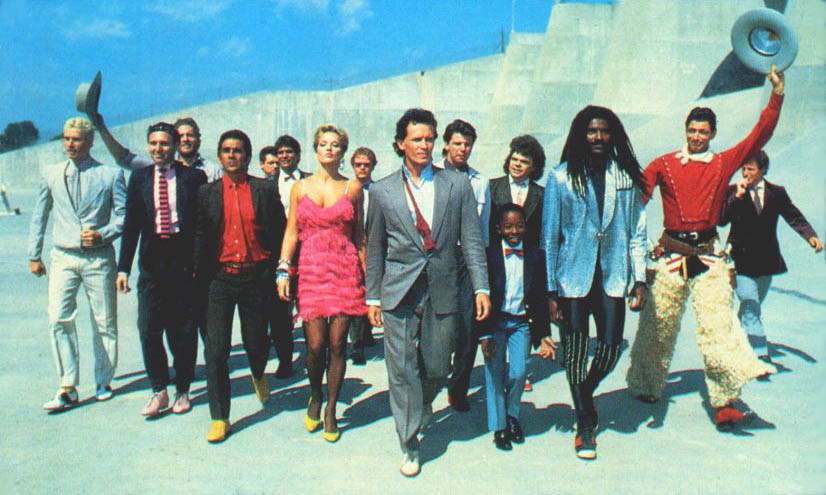 I want to be each of these characters for a day...
​​Despite not having been acquainted with the tune (or the film) very long, I feel it has already become a favourite because the music has been whistling out of my lips ever since the viewing. Of all the strange and intriguing elements the film has to offer, it is this theme that has stayed with me the most. Well, that and Christopher Lloyd’s character John Bigbooté arguing about the pronunciation of his surname (Bigboot-tey, not Bigboot-Y) which keeps urging me to break into the Mel & Kim song Respectable ‘Tey-Tey-Tey-Tey Take Or Leave Us…’.